A Genealogy of Magic - Story Notes


The idea for this story materialised sometime last year, on my fifth (?) rewatching of the wonderful animated film Summer Wars. Setting aside all the magic and romance, I wanted to write a story that was about a large and complicated family and how each of them might remember their history differently. What did Ippei do and how did it happen? It really depends on which family member you ask.

I also wanted to write a version of magic that was Jonathan Strange and Mr Norrellesque, but set in Japan instead, with its own alternate history and with its own version of Fairy. Not a lot of the alternate history made it into the story, but it sat at the back of my mind while I was writing it. And finally, before I started writing the story properly, I wrote, among other things, the introduction to Ippei's Treatise. I've posted it here after these notes (and I suppose the fact that Naoki was riveted by this sort of dry academic exposition even as a high schooler says a lot about how deeply and endearingly boring he is). I've also included a (partial) family tree in case anyone's interested; you might notice that not everyone was mentioned by name in the story.

Most importantly, some thanks are in order:

My thanks to the magnificent, marvelous

beili, who has enriched this story immensely with her beautiful and stunning art. It's always such a privilege working with her and seeing her make her magic. I have been blown away and really moved by the amount of effort she's put into each detail and am thrilled by how it's all come together. <33333333333

To C, my beta and fellow writer-in-arms, for all the detailed comments and the flaily emails and for listening to my rambling over dinner about the ending of the story, and for returning to the story to fix my grammar and everything else after I was done. Every story is as hard as it is delightful to write and you made it that much easier. <33333333333

It has always been my suspicion that there is no discipline more misunderstood, more inconsistent, or more fascinating than the discipline of magic. The history of magic in Japan is as long as the history of the land itself. However, for various reasons, this history has remained largely untold. Many have attributed this to the secretive attitude of many of the old magician families, who have guarded their records and spellbooks jealously. The state, too, has had a part to play in the modern proliferation of technical spells without a larger historical or cultural context. The result is the magic we see today, democratised such that anyone may learn to cast a spell, but with its larger mysteries still obscured.

The purpose of this treatise is not to compile a history of magic, nor is it to lay bare all its mysteries. Rather, I mean to distill some principles consistent in the practice of magic, whether lay or formal. The nature of magic is such that it varies depending on who is performing it. Family traditions have also played a part in the way spells have been shaped over the centuries. Invariably, lacunae have developed as a result of the divergent development of magic since the Kamakura period. So have overlaps, of course, and some of the most powerful spells – for better or for worse – have emerged as a result of years of feuding over the correct form and incantation. What all this means to a scholar of magic is that any given spell will have three to four different origins, and at times voluminous amounts of accompanying commentary from various magicians over the centuries.

What I have tried to do in the first chapter of this book is to outline the basic tenets that inform almost every major family's practice of magic. It is particularly useful to grasp the key differences between the approach to magic in the Kansai and Kanto regions, although I would emphasise at this point that there is unavoidably some generalisation in my approach. In subsequent chapters, I give a brief outline of key events in the course of history and their significance in the development of magic, before going on to examine the five classical categories of spells. The first two, the Gate and the Fence, are the most commonly used today. The third, Illusory spells, are integral to the repertoire of a modern Practical Magician. These days, unfortunately, they are most often seen in festivals as mere displays of magic. I will examine how such charms have been used practically and effectively throughout history. As for the fourth category of Strength, I will be proposing that it would be more appropriate to call it Power, contrary to convention. In particular, I will outline the practical difficulties in performing figures of power, due in part to the incomplete nature of most recorded figures of this nature, and their relative complexity. Finally, I will forward the argument that the fifth category of Transformation spells are not, as previous scholars have argued, dead spells that can no longer be cast, but rather modifiers of spells in the existing category. I will also be proposing my views on magical ethics and the technical and moral limits of magic.

In the past three years spent working on this treatise, I have often stepped back to wonder at the sheer foolishness of this endeavour. However, it is my hope that this work will provide an insight into this curious thing that we call magic. It can be beautiful yet mundane; powerful, terrifying, and illogical all at the same time. It has shaped our history and our land and continues to permeate our everyday lives. It is my hope that we will use it wisely and responsibly.

I owe a great debt to Professors Yoshida Kou and Hyuga Shinji from the Department of Practical Magic at Kyoto University, as well as to the staff at the Kyoto University Library. I am extremely grateful to the following individuals for kindly opening the doors of their great and ancient libraries to me: Matsudaira Michiko and family. Nagao Tomokazu and family. Hino Susumu and family. I also extend my gratitude to the Magical Policy Bureau of the Ministry of Education, Culture, Sports, Science and Technology for their continued support of this project. Finally, I thank my family. This is for Hotaru. 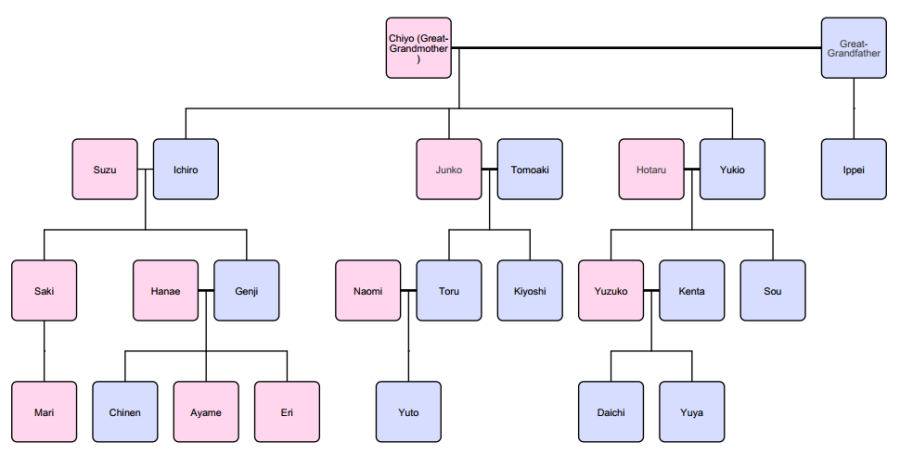 * Great-Uncle Ichiro actually has another son and at least 3 more grandchildren but they couldn't fit in this tree and weren't mentioned at all.